There was a certain tentative feel to the start of ESME’s 2013 winter season, with both the singers and orchestra being faced with brand new conductors. But each of our new leaders quickly established a great rapport with his respective ensemble – Andreas Partilla with the orchestra, and Andreas Sczygiol with the singers. (Massive confusion about names is avoided thanks to Mr. Partilla’s preference for the nickname “Andi”). And with the winter season being relatively short, this was a good thing – there is quite a lot of work to cover before the big concert.

The Big Band was kept busy working in a new trumpeter, pianist and singer, plus a second guitarist – not to mention an alto saxophonist just back from a world tour! Despite being without a leader for most of this season, they have continued to put in dedicated rehearsal time in anticipation of sharing the stage in their inimitable fashion with the singers and orchestra for the holiday performance.

Weekly rehearsals for all three ensembles included the usual mixture of deep concentration and laughs, that special ESME synthesis which inspires so much loyalty among its members. What other musicians in Munich have as much fun as we do?

The orchestra were particularly excited to be working on a premiere of a new work, Yggdrasil, by none other than our own Daniel Wytrykus (violin), and equally enjoyed engaging with the musical humour of Disney’s Jungle Book. The singers have been inspired this time around by the challenge of modern pieces as well as perennial favourites like the Hallelujah Chorus. Meanwhile, the Big Band are grooving to some of Stevie Wonder’s greatest hits. ESME’s eclectic repertoire continues to set us apart from other musical organisations.

A highlight of this season was once again the Weekend Away, held from 8-10 November on the premises of the Humboldt Institute language school in Bad Schussenried. The opportunity to put in longer hours on our various pieces for the upcoming concert, as well as the chance to socialize with other ESME members, make this event really special.

There was even time to play a few group games – though the “get the pillow out of the basketball net” activity was not actually part of the planned programme, but rather a spontaneous affair! (Note: no bassoons were harmed in the making of this picture.)

Everyone is now busy with final preparations for “Snowflakes and Sleigh Bells”, our seasonal offering to be held on December 1st at the Münchner Künstlerhaus in Lenbachplatz. It promises to be a very special evening for performers and audience alike, and a great start to the holiday season. Hope to see you there! 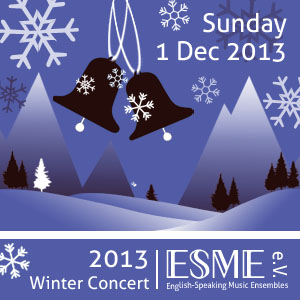 To put you in the right mood for the Winter Concert we are pleased to present:

A Tale of Songs

A tired Sir Duke falls asleep at the Darkest Midnight in December reading The Jungle Book. He is awakened in the Morning by Solveig’s Song and sets off for the Hall of the Mountain King. He approaches the throne and says, “Sire, a boon; I Wish A Gaelic Blessing.”

Without speaking, the king leaves his throne and leads Sir Duke to Yggdrasil, a giant tree growing in the middle of the hall. The tree is ringed by crowds of goblins, trolls and other mountain creatures, all chanting, “Locus iste – this place – is a magical place!” The King approaches the tree, raises his arms and invokes a strange incantation: “Riu, Riu, Chiu!”, which in the ancient tongue of the mountain means something like “Let It Snow! Let It Snow! Let It Snow!”

Turning to Sir Duke, the Mountain King explains: “We call this wide hall where our magical tree grows Broadway. Every year at this time, we come and pray to Yggdrasil, hoping that he will tell us Santa Claus is Coming to Town, so we can have Christmas here – Christmas on Broadway.”

“No,” replies the King sadly. “I long for my people to have a proper Christmas. If you can bring Santa to us, I will grant you your Gaelic Blessing. And on that day, I The King Shall Rejoice!” He turns to address his subjects. “On that day, will you be able to Handel it?”

Sir Duke vows that if it is within his power, he will see that Santa will visit the Hall of the Mountain King, by The Twelve Days After Christmas at the latest.

The Mountain King sends Sir Duke on his way, but not before offering him some chips and homemade Pat-a-Pan Salsa.

Will Santa’s Sleigh Ride to the Mountain Kingdom be successful? Come to the ESME “Snowflakes and Sleigh Bells” concert on Dec 1 and find out…

The ESME Orchestra, Singers, and Big Band will be performing on Dec. 1, 2013, at 7pm in the Festsaal of the Münchner Künstlerhaus.

With popular classics such as the Hallelujah Chorus by Handel and Grieg’s Peer Gynt Suite, as well as seasonal favourites Let it Snow! and Santa Claus is Coming to Town — and the world premiere of Yggdrasil by our own Daniel Wytrykus!

Publicity materials are available below for printing and publication, and postcards will be available at the next rehearsals.

There are 4 versions of an A4 poster for you to print out if you would like something larger than a postcard. They are labelled as such and at the bottom of this set of publicity materials.

No gigs are currently scheduled.